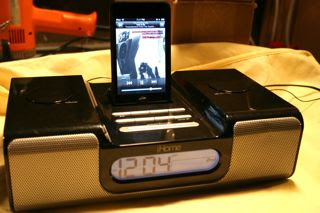 I was first interested in the ihome alarm clock because of it’s ability to charge the ipod and use it as a radio. After browsing ebay for one I noticed that a lot of the ihomes were being sold “as is” with the ipod function no longer working. So I bought a broken IH5 for $5 & as it turns out there is an easy fix for the problem. The pins in the dock connector wear out and your ipod will probably sooner or later not connect anymore and not switch from the aux setting when you dock an ipod. I called ordered a new dock conector from ihome. They with give you the part number you need for your model. My part was described as dock connector part # IH5-101 (yours may be different.) You will have to use snail mail and send a money order to SDI Technology for 9.50 + 4 S&H = 13.50.

To open the ihome first, place it on a soft cloth or towel so you won’t scratch the plastic. Turn the radio so the bottom is up. 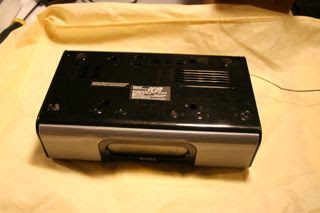 Next locate the arrows on the bottom of the ihome next to the scew holes. These arrows indicate the screws that need to be removed to gain access to the inside. Two of the screws are covered by rubber feet but can be easily removed with a little prying from a small screwdriver. 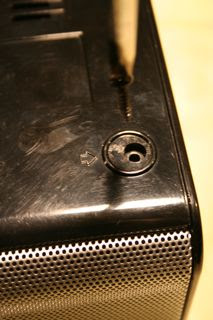 Remove all the screws with arrow indicators. Make sure you remember where they go. Not all the screws are the same size, so draw yourself a map of the bottom of the ihome and tape the screws to the location they were taken out of, or what I normally do is arrange them on a table in the pattern of their original location. 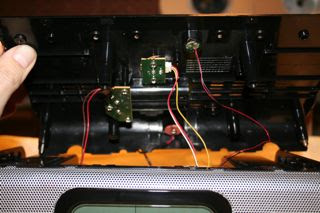 Now pull up the bottom cover. There are four sets of wires connected to the bottom plate. Detach the 3 wire sets at the white connectors. The fourth wire set will be long enough for you to set the bottom plate flat on the table. 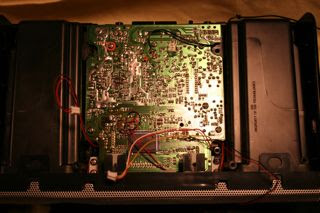 Next remove all the screws on the circuit board and remember their location. 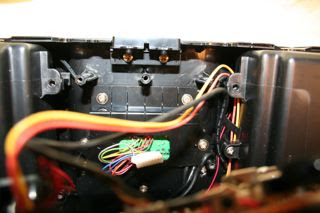 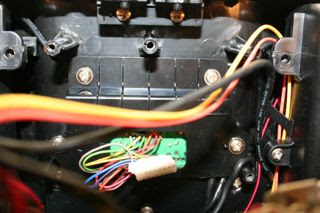 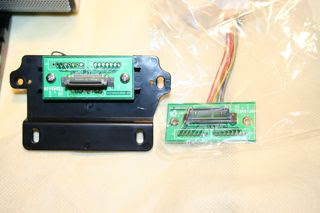 Now remove the two screws and replace the old dock connector with the new one. I noticed that the new connector was slightly redesign and appeared stronger, so hopefully it will last longer than the original. Now just replace everything in the reverse order. Be careful to move the wires out of the way when you replace the circuit board and bottom cover. Now the ipod will connect and hopefully work like new.